Celebrate St. Patrick’s Week with an Irish Movie Night
The Irish Club of Alaska will be celebrating St. Patrick this year with an informal, family event – an Irish Movie Night at the East Anchorage home of Claire Wilson and Terry Kearney. We’ll gather at 5:30 pm on Saturday, March 14.
If you plan on joining us, PLEASE CONTACT CLAIRE AT 907-602-8838 or REPLY BY EMAIL TO akirishcommunication@gmail.com. You will receive the address and directions. If you are able and so inclined, bring a sweet or savory Irish-themed treat to share. We’ll be watching “Song of the Sea” (in Irish “Amhrán na Mara”), an Oscar-nominated
animated fantasy film by the team that created “The Secret of
Kells,” which won the Academy Award for best foreign language film. “Song of the Sea” follows the story of a 10-year-old Irish
boy named Ben who discovers that his mute sister, Saorise, whom he blames for the apparent death of his mother, is a selkie who has to free faerie creatures from the Celtic goddess Macha.
A Family-friendly Event
Bring your family and friends and join the Irish Club of Alaska at the
Anchorage Museum for
STORYTELLING SATURDAY THEATRE AT THE ANCHORAGE
MUSEUM
1 & 3 p.m. Saturday, March 7th & 21st
Auditorium
Learn about our community’s many cultures during this family-friendly, live performance of fairy tales and other cultural stories. Included with admission (free for museum members).
March 7 is an Irish Story This version of
“Cinderlad,” is an adaptation of an old
Irish story and features a male Cinderella
who is aided by magical beings.
Celebrate Saint Patrick’s Day early by
wearing green. 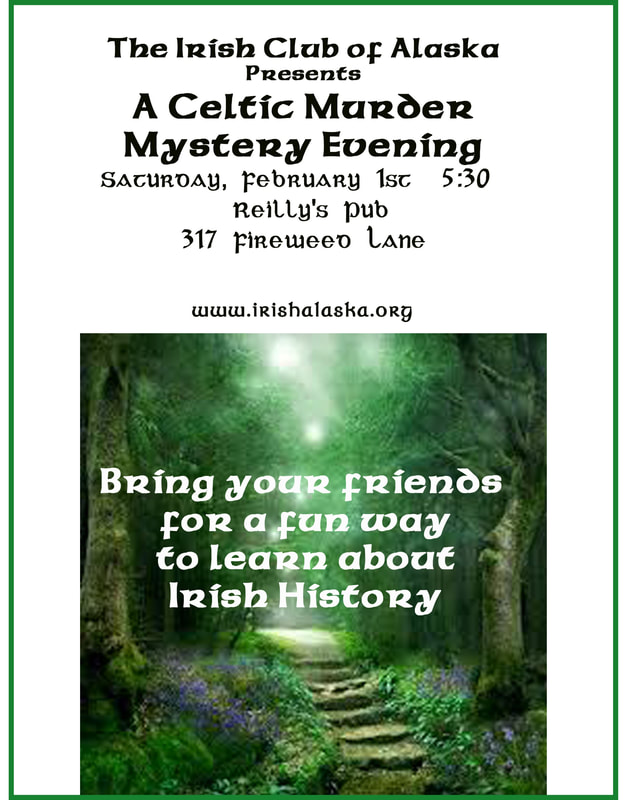 Thank you to everyone who came out to Reilly's Pub to join our Murder Mystery Evening and learn about 7th Century Ireland, the Rock of Cashel, and Brehon Laws.  Great fun was had by all and some of you even figured out whodunnit!

Watch for our March Celebrations!
Reserve your place now for a new event...
An Irish Cooking Class and Holiday Tea
Saturday, December 7th
5:00-7:00 pm
Details in this issue of the newsletter
Thank you to our members who turned out in force to help serve lunch to our friends at Beans Cafe.  An afternoon of Irish music featured Shonti Elder and Elsa Aegerter, Mary Ann Green, Mark Ryan, Dawn Berg and Rebecca Wolverton.  The patrons and staff were delighted with the afternoon.  We also donated more than 275 pounds of food and paper products thanks to the generosity of our members. 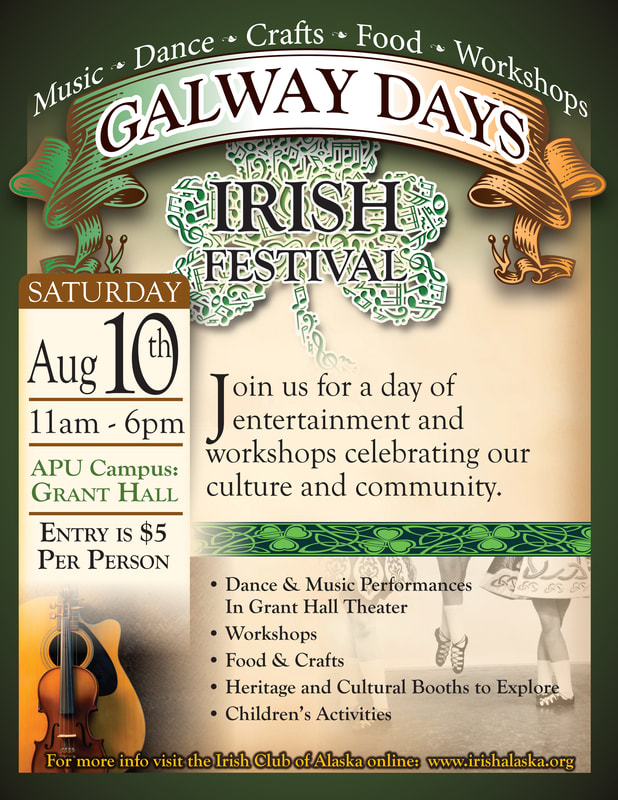 Festival goers can see some of Alaska’s most popular Irish and Irish American performers including The Irish Dance Academy of Alaska, The Derry Aires, Crooked Road, Rogues and Wenches, Rebecca Wolverton, the Midnight Sun Cloggers, Linda Yarborough and many more.  Performers will be in the Grant Hall theater, while vendors will be situated in the foyer and hallways leading to classrooms where workshops will be held.

Workshops include topics such as Irish History, Irish Literature, Harp Technique, Ceili Dancing, Singing in Irish for Children and more.  Workshops are a separate fee.

The ticket price is $5 per person (babes in arms free) and is good for the entire day.